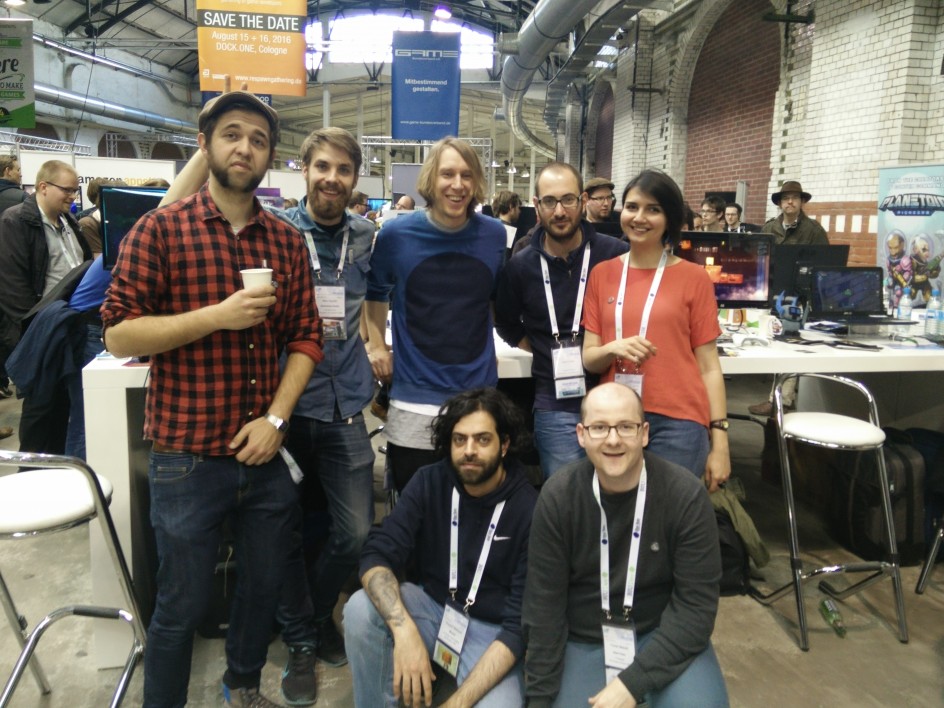 long time no see! Games Week is over and I’m on the train back to Kassel. As always, Berlin was awesome. I met a ton of great new people, caught up with old friends and was awarded the grand sunburn prize for my achievements in not giving a damn about the sun. Good times. The picture above shows all the great people from our row at the Quo Vadis Indie Showcase. But let’s start one week ago. I guess this is going to be a long one.

Last Sunday I met up with Stamm at Station Berlin to set up our “booth” at the Indie Showcase. Setting Up At Quo Vadis

The setup was not much work, Stamm’s Macbook, a display and a controller, plus some goodies. We started meeting other indies in our area and met up with our former intern John, who just started a job at small Berlin studio and was showing their game. I’ll have some photo albums below, posting every picture on its own would make this an endless scrollavaganza, plus the internet on the train is kind of wonky. After a free beer — German game conferences somehow always have free booze at some point, and QV had its fair share, but I’m definitely not complaining — and a little more networking, we went home for the evening to get some sleep ahead of the hard week.

Day 1, Monday, started off with free coffee and breakfast. As we found out, our passes included access to the business lounge, which would come in handy with burgers, potato wedges, popcorn, coffee and beer for the price of a smile. Big up to the sponsors for making this possible. The business lounge also housed the pitch & match area, which is a bunch of tables we were able to use to book meetings with other attendees. As games industry business shenanigans are always plastered with NDAs and whatnot, I am not sure if I can publicly disclose who we met with, so I’ll stay on the safe side and leave it out of the blog. What I can say is that we are very happy with how our meetings went and can hopefully see the first results in the near future. I can only stress to indie devs to get out and attend these kinds of events. Personal contact will always be the easiest way to get your foot in the door with potential business partners. The second big plus are other developers. Over the three days at Quo Vadis we made lasting connections with many other devs and can call some of them our friends now. Big shout out to all new friends from our row and to me for drawing the perfect table number!

Monday night was also the night of the unofficial Quo Vadis karaoke party, which was the perfect event to go with all the free beer from after the conference already in your blood stream. I met my arch nemesis Majus, who had an array of songs practiced for the main stage, which showed me that I came unprepared. For next year, I will have to start training at the local karaoke night in Kassel to have a repertoire of songs ready. A karaoke sing off is exactly what this feud needs. So without entering the big stage I sang some Brian Adams and Bon Jovi with the good Berlin indie people and others. When I hopped over to another karaoke booth, the fate took its course: Day 2, Tuesday was the day of more free food, even in the evening, when I represented the Pants at the annual matchmaking dinner, like last year. More meetings, more coffee and before rushing of to the dinner, the “Best of Quo Vadis” pitch. Stopping in Wolfsburg now and it’s sort of snowing. In April. When I have a sunburn. Thanks. 15 of the 40 indies were invited to show their games on the main stage in front of a jury and the conference audience. Sadly, we did not make first place, but that is really the only thing that was not dope about this week. Straight from the stage, I raced to the matchmaking dinner, where I met a few interesting people. When they served the main course though, I found myself confronted with my old “friend” – eggplant. Thankfully they were grilled, so they gooey, weird structure was not a problem. The taste is OK at that point as well, so I took it like a champ.

On day 3, Wednesday I camped out a talk by a Google Play Store representative to pitch him Blown Away and see if we could get featured at some point. The talk went well and I hope, we can achieve some more downloads soon. As mentioned before: go to events, grab people you want to talk to and pitch your stuff. You should have good stuff, though. Other than this, we had to say good bye to some of the indies, because they were only there for Quo Vadis, pack up our stuff and have some free cocktails – of course. As a conclusion of Quo Vadis I can say that a huge majority of people who came to play On Rusty Trails really enjoyed themselves and complimented the look, which is something we often hear. What made me extremely happy though, was many people praising the controls. Great platformers get an edge over good platformers from crisp controls, and Rico has delivered. Go Rico! 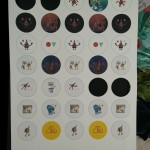 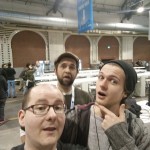 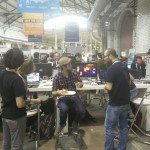 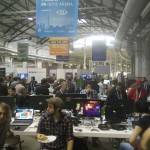 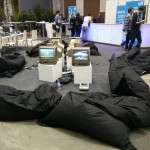 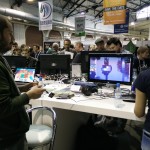 Some On Rusty Trails Testing 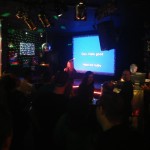 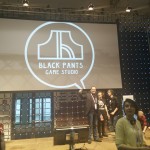 Day 4, Thursday, was my start of A Maze, the games festival with a focus on indie and artsy games. The venue was in the same area as the years before — around Urban Spree Berlin — but they added a new location, right next door, called Haubentaucher, which has a huge pool and a gorgeous outdoor area. You could watch talks inside, or sit in a beach chair outside and watch them on the big LCD display, while catching some sun. You know the rest. For this second part of the week I hung out with a crew of friends I had made at Quo Vadis, Hossein, Michael and Robin. These guys are so awesome I can only regret not having met them earlier. In the evening we walked around the venue and strolled towards SOS’ red fire truck, when we heard the announcement for a Hoky tourney. Hoky is a game by Vlambeer’s Jan Willem and Kitty Calis. As the name suggests, it is a four-player hockey-ish game with weird mechanics and a lot of fun. They make one unique build for each festival they travel to and save it on a golden USB stick. The winner team receives the build and can do with it whatever they choose. One of the teams who had signed up did not show, so my glorious thirty minutes of fame as Jon Brown impersonator had come. Together with my — also fake — partner, Nathan we hokied our way to the grand finals, a best of three match up. On the way we kicked out Majus (mwahaha) and developed tactics for winners. The finals came down to the third game, as we lost the first one with 0-1 and had a convincing second game with 5-2. In the last game we had the 1-0 lead, until I scored an own goal, resetting our score to zero. 30 second before the end the opponent team scored a goal and my attempt in the last few seconds of the game sadly hit the goalpost. We had to concede the golden USB stick and now I have to go on a hunt on the internet to hopefully get my hands on it. My sunburn had the uncool side effect of getting me cold and shivering every evening, while also feeling very exhausted, so my stay at A Maze took not too long into the night.

Day 5, Friday, marked the end of my Games Week. After breakfast with Stamm, I went over to Urban Spree and listened to some talks – now with a stylish, pink A Maze cap on my head. Over the day I met with the crew and we went for some food and chilled at Haubentaucher until the sun went down. We moved back to Urban Spree for the last party, where the guys managed to keep me way longer than my freezing body wanted me to. Some 8bit music did the rest – sorry Hossein, that stuff was great until the Cotton Eye Joe.

On Saturday, I rested, wrote some emails to catch up on my inbox and in the evening met up with Stamm, Tobi and some friends, plus new friend Robin for the final night in Berlin and some drinks.

Back in rainy Kassel now. Thanks for sticking with me for this longer blog, if you are still reading. Games Week Berlin was a blast and I can’t wait for the next event I will go to. To friends, old and new, to the Pants for apparently making a great game with On Rusty Trails and to you, for reading my blog. Enjoy the photos, see you on Sunday iteration #50 of the development update. 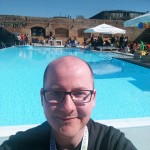 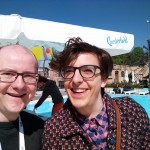 With My Arch Nemesis 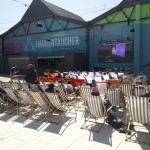 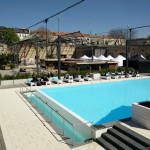 Haubentaucher Is A Beautiful Venue 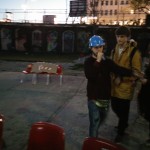 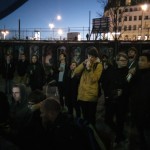 The Crowd Is Pumped For Some Hoky 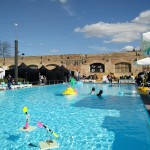 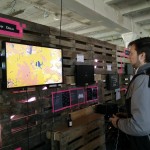 Robin Playing Games At The Exhibition 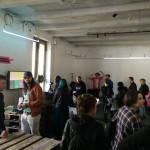 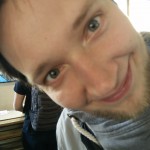 You Brought This On Yourself, Sir 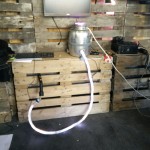 A Game That Has You Vacuum Colors 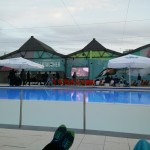 Watching The A Maze Award Ceremony 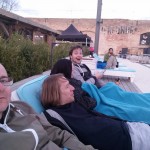 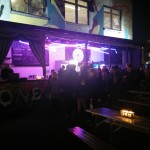 The Last A Maze Party 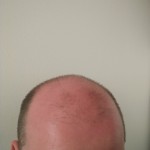