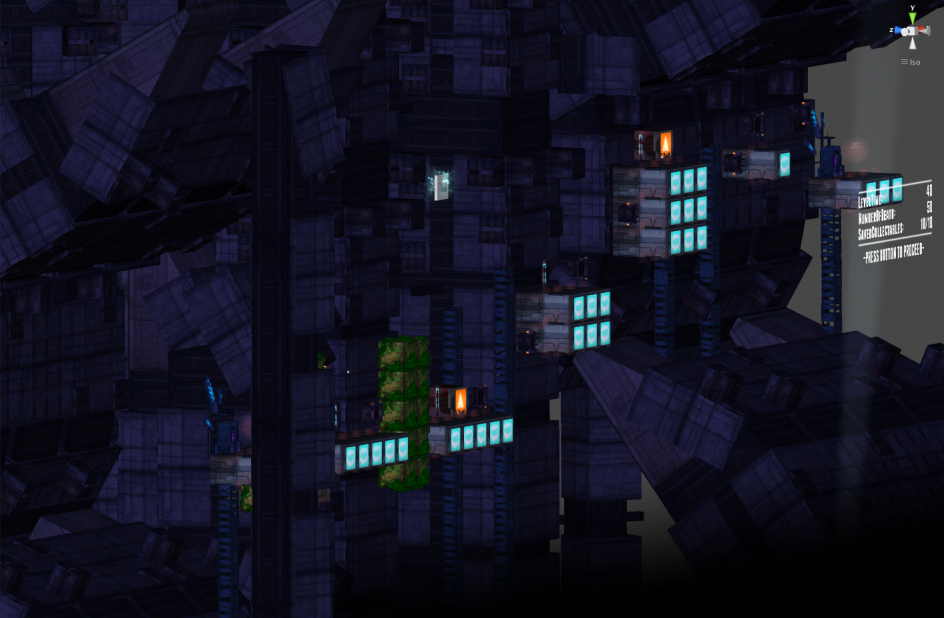 This week we will have a short update, since I was busy translating our funding application.  Also, next week, we will have Murmel’s moving blog with photos from the new Berlin office, and many other joys and wonders, which I will blog live from Berlin. It’s travel time, yay!

On with the important stuff! Stamm was working on backgrounds for the machine world. Our featured picture, and the three below, show his work. All the yellow lines and hearts and stuff are called “gizmos”. They will not be visible in the finished game and are used to visualize certain effects, which you cannot see in a picture. For example, from where to where can a platform move and where is the turning point – you get what it’s about. When Stamm sent me the shots, he also told me that he likes working on machine levels. When I asked him why that was, he said: “Because the machine is so dark, which make it super-convenient to draw backgrounds for. You can work pretty flat and don’t need any super deep 3-d scaling. Showing these shots in the blog will probably be the only time, people can even see that stuff, because we’ll make it so dark, you won’t even see it in game”. j/k Did I mention, at some point, that Tobi likes gifs? Oh right, last week…

Actually he only gave me one plus a screenshot, so he’s not going cold turkey just yet. His focus was on filling some level holes. What that means is, he was playing through the game and added levels in areas where he found a feature had not been introduced properly, or the difficulty curve from one level to the next went up too steeply. So basically, he rounded out the gameplay experience.

His screenshot is taken from the war levels and shows a panicking Elvis. What was that? Did I just hear someone say scaredy-cat? Well excuuuuse me, princess! I’d say, given his rusty, red nature it is perfectly understandable to be freaked out by those huge rain clouds! Last but not least, Tobi’s final gif(t) – eh eh eh. Sorry, I am terrible. We can see an Elvis being rocketed from the wind tunnel into the factory. This is taken from a cutscene, which Tobi is also working on, since his features and the story for the game are mostly finished. Now he does cutscenes and fine tuning.

Since I have no good ending this week and no more stupid jokes, I will have you know that I am, in this very moment, listening to White Rabbit by Jefferson Airplane.

You know, when to throw the radio into the tub.

See you next week, live from Berlin!

P.S. I know you have friends! Mind telling them about us? Clickedy-click below!