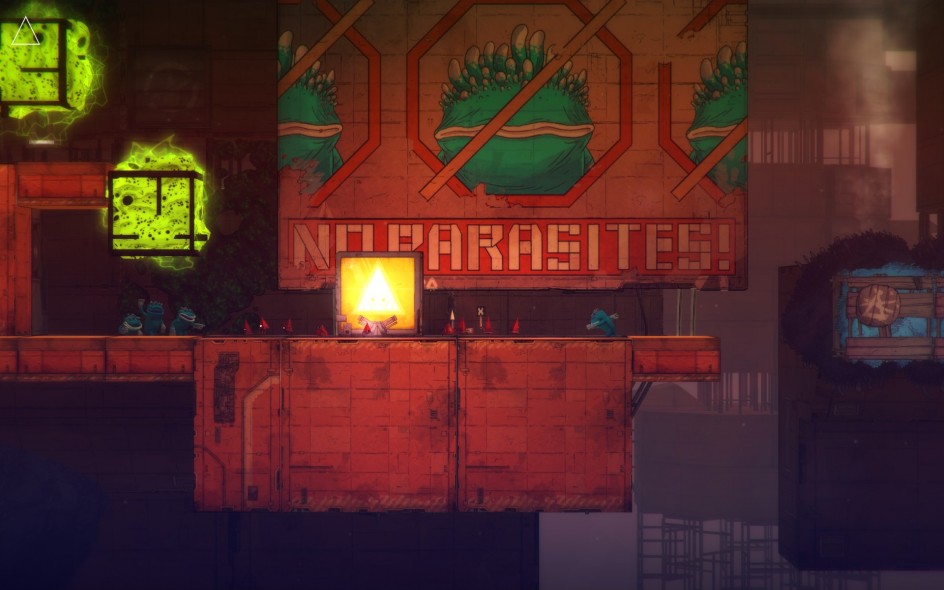 Hey everyone! It’s time for the weekly development update and we are starting with a screenshot from our new beta version. That’s right. A few hours ago I sent out the beta keys to our testers and they are already trying to destroy the game – for science 😉 As for the screenshot, I am not 100% sure, if we had that billboard on the blog before, but definitely not from inside the game. We also have our protesters and stone throwers and Elvis in the middle, standing at the savepoint.

The beta announcement has brought first attention to On Rusty Trails, and so we have been contacted by ProjectMQ who want to feature us on their weekly indie game Twitter promo. I answered a few questions about the studio and the game and Stamm made some gifs, which will be sent out via their Twitter account when the feature starts.

Ah yes, good old laser-platforming. I’ve stopped counting the number of F*CK!s and son of a b*tch!s  I shouted when playing On Rusty Trails. I hope, some of our testers already have bite-marks on their controllers. Some schadenfreude is always good to make me feel better about my failings in this ridiculous game!

As well as the beta, our coming soon page on Steam is also live now, and you can add On Rusty Trails to your wishlist – as a few hundred people have already done. The hype machine starts rolling, peeps!

A gif from the later parts of the game. Elvis is being chased by platform-switching energy fields. Some times you change the platform and some times the platform changes you! I’m so deep, I should switch my studies to become a philosophy major. Lazer.

I have a pretentious blog with extra gifs and a double shot of lazy puns for… Thomas. Who the hell is Thomas?

Bonus gif time. We were naughty Pants and held out on ProjectMQ to save one last special gif for my awesome blog readers. Because you’re the only people in the world I care about. You and Justin Bieber. #forrealtho

Studio news: On April 7th Christian and Tobi will be in Munich for the German Game Award, and the rest of us will be watching the event live over at the stream. So can you! Be advised, the stream will be in German. Fingers crossed for Blown Away!