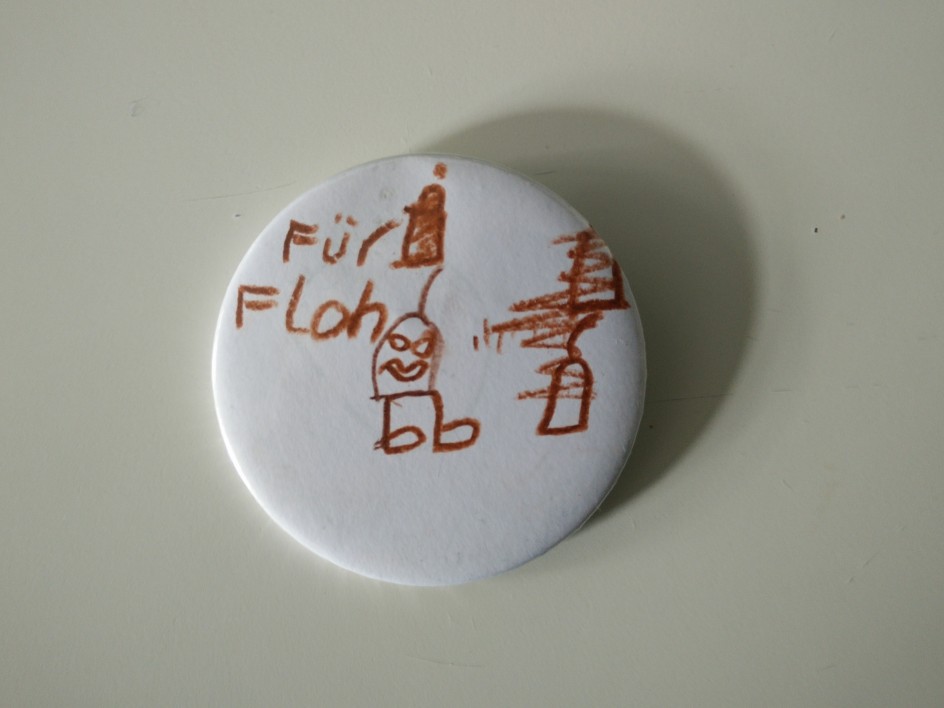 Hi everyone! It’s time for the weekly development update and we’re starting with a little surprise I received this week. A friend of mine works at a social project, called Streetbolzer, which brings kids from all over the city together through football – screw America, you play football with your feet! He works with many children and told one of them about our game Blown Away. The little guy played the game and liked it so much that he made a Hendrik badge for me. I feel very honored! Things like this make me love my work even more. I’ll put together a little surprise to give something back!

This week’s awesomeness knows no bounds, as we plunge into a wealth of animation beauty. By doing so, I also have to make two announcements: As suspected in an earlier blog post, Bao kick’s Tobi’s ass when it comes to animation – or anyone else’s for that matter. Here are tons of NPC (non-player character) animations you will be able to find all across the world of On Rusty Trails. My personal favorite is the angler guy on the left, because he’s just chilling and doing his thing. But we also have all sorts of workers, protesters, jumpers, screamers, dancers and a guy who is doing a “Stamm-on-a-treadmill impression”, or whatever. Look at the Hairy to the left above the one with the megaphone, what is he even doing?

The second part of the announcement relates to the form in which the animations are being presented on the blog (a friend of mine once was furious about the excessive use of passive sentences on blogs, and since my second name is “Meta”, this sentence will not be edited and stay as it is). Also, it fits the animation of a Spike being razzed by a Hairy. I call him Nelson. But I am stalling on the announcement.

The announcement has even riled up a bunch of Spikes upon hearing the news. Over the last weeks, there has been a lingering sense of unease on the Black Pants team. People have been acting strange and were on edge most of the time. I was not quite able to pinpoint the issue, but attributed it to the stress of coming closer to the release date of a major project. I could not have been more wrong. I started hearing whispers during our video meetings. Subtle, at first. “Cliff”. Cliff?! Who the hell is Cliff? Is it a warning? Is it a hanger?

“Riff”…”Skiff”. No, that wasn’t it. Fear started creeping up on me. What were the whispering voices trying to tell me? I could not shake that restless feeling. I woke up at night, drenched in my own sweat and tears – and those were probably not the worst fluids in my bed. I had to find the truth. A horrible suspicion grew in me. I followed a lead to the content channel on the Black Pants Slack. I skimmed through this week’s offerings, which had been carefully placed by the townsfolk of art-ington to appease the god of the development blog, WHOM we all serve to bring you this piece of reading pleasure each week. There it was:

And if that was not enough:

AND THE FREAKING CRAB EMOTICON?! Upon my soul! Bring me the heretic. I want to crush him! See him driven before me! Hear the lamentations of his woman! I immediately picked up the phone and called the Berlin office. “SAY IT TO MY FACE”, I screamed into my mouthpiece. “JIF!!!”, the person on the other end gleefully shouted. Silence. I was struck by lightning. Figuratively.

Slowly, I put down the phone in disgust. I swallowed. Once… twice… audibly. My shaking hand slowly led the phone back toward my ear. “I am going to end you”, I could hear myself say with a quiet, emotionless voice.

Don’t Let It Come To This

Look, kids. Can you see that Hairy being bullied by all the Spikes, because he/she/it is different? That is not OK. People can be different and we should embrace that. Differences are awesome and make things interesting. There is just one exception to the rule: It’s GIF! Graphics Interchange Format. Be reasonable, don’t be different. Friends don’t let tehir friends say “jif”.