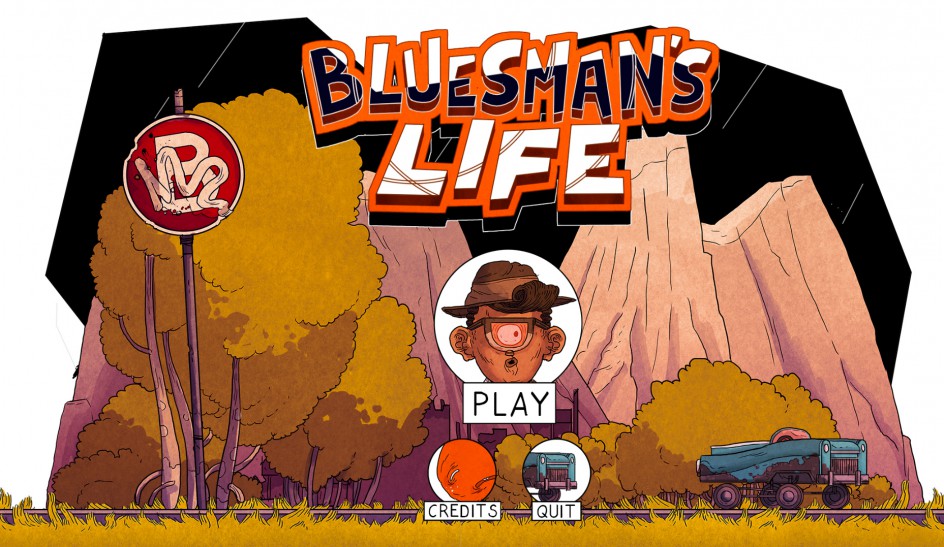 Hello everyone! It’s time for the weekly development update with news from the blues! Our featured image is the first mockup graphic from the game menu, and as you can see, the current working title is “Bluesman’s Life”. Our hero, Mack, has to learn the way of the blues and we will accompany him from a young age until he is old. How much of this way will be in the prototype phase, is not 100% sure yet. Last week, we met Balloonhead, and this week, we will see two more of his encounters. First off, we are joined by Eggman, who plays the steel guitar. Something is definitely going on with heads in this game, since we can’t even see Eggman’s . He owns some sick kicks and has freaking egg tattoos. He’s obviously rocking some sweet undergarments, which had to make an appearance in one of our games sooner or later. Are they magical? We’ll have to wait and see. The more pressing question to me here is: If you put an egg and a pan into a box, can you know for sure, if the egg is scrambled or fried, and do you not therefore have to assume that it is both? Here, we have a scene form the station called City. We see the Mackster with his drum and Eggman on his throne of cool people, and they are dueling out who the better blues man is. I showed you the mechanic before, so not much explaining to do here. Next up is the Dame, who we have seen a while back, but who now has received a roller skate upgrade and a few more touches here and there, which does not make her any less mysterious. She is a mischievous element in the game and having those roller skates definitely gives her the speed to make Mack having to chase her, if he ever wants to come close to those luscious lips. But having a band is supposed to help out with these things, so Mack might be on the right way. Not that I know anything… about anything. Bands, girls or the story of this game.

Speaking of which, here is a GIF of the assembled band, as far as we have the characters already. Mack has to add a trailer to his ride and if you have enough fantasy, this could go for a tour bus. Who calls themselves a real band, and what calls itself a real game about blues, obviously is going to need some real music, and I can not really show you anything here, but Christian went to meet our real band of musicians, responsible for the soundtrack, and what he has brought back sounds incredibly good. Really quirky, and spot on with the mood of the game.

In other news, we had our first beta testers play through On Rusty Trails and are now working on their feedback, to build a new beta version with more content and more testers at a point some time in the near future. Vague is en vogue, here in this blog!

That’s it for this week. Make sure to check back on the blog next Sunday, when we might or might not add bacon to our eggs.