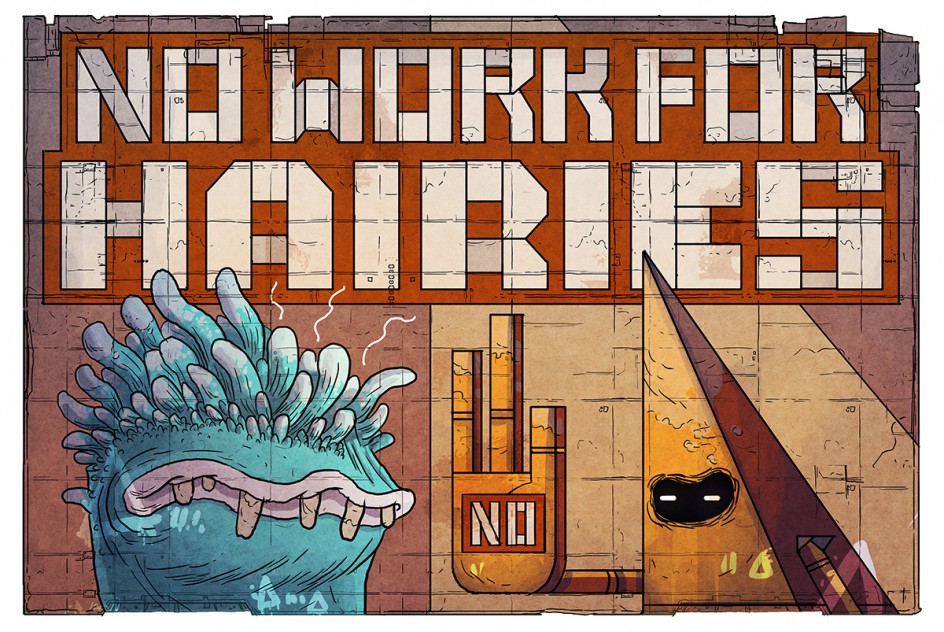 Hey everyone! It’s time for the weekly development update, and we are back with On Rusty Trails. Blown Away is in the review process with Apple, and if everything goes well, we can release some time next week. Tobi has transitioned to ORT, since his job on BA is done and so has Stamm, because Christian is so busy with the BA release that the blues will have to wait a little. Our featured image brings us back to the awesome billboards we had introduced a while ago.

We have come quite a way from when I last told you about the story of On Rusty Trails. At least in terms of how we want to tell it. We scrapped some of the old ideas and are now focusing on telling the background story mostly… in the background. Very often, a game will use cutscenes to advance the plot, but we feel that these hard interruptions of the gameplay flow should be as limited as possible, and the story should be – if not totally interactive – played out during the game itself. I am not involved in every project to the same extent, so this week was the first time i heard about it, when Stamm sent over the art – and I was extremely hyped. I am a big fan of the billboards and they do two things very well: tell story elements, to create a bigger picture, and set focus on one of our trademark features – the art style. At this point, two of the billboards are finished, which are the ones you are seeing here. When I video-called the guys in Berlin and Stamm told me more about the billboards, he said: “Yeah, I finished these two and we want even more of them in the game, so I think I will have to draw around ten more.” To that Tobi said: “More like 30 more!” I guess, Tobi has big ideas in this area. Have fun, Stamm!

As we completely focus on the background this week, here is another way to give players information about the world and its inhabitants. I am talking about animation.

Bao is helping out  with bringing life to the game. This blog will be a good opportunity to see detailed parts of the world, which will fly by while playing the game. Many of these small background animations will paint a vivid, lively picture, but are very hard to grasp during the actual playing.

As you might remember, the rain and storms have been destroying many parts of the Spike world, so the little robots are toiling away, trying to rebuild their homes, and finding shelter for everyone.

This is the cutest animation of the three. The little dude is keeping watch to see, if rain approaches. The tapping of the foot is just adorable.

Today, Christian and I met with Craig, who is one of the musicians, responsible for the in game soundtrack. We talked about themes for songs and he ended up already having some great ideas for what we were looking for. More at a later stage.