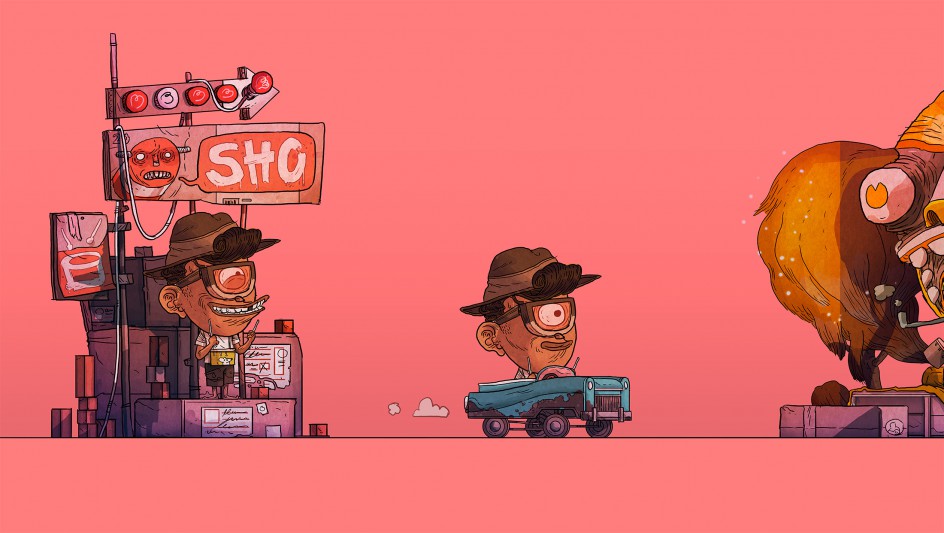 Hi everyone! It’s time for the weekly development update.

Tobi is still finishing up Blown Away, working on performance issues and beta testing, so we have no new artwork from him. Hence, we’ll have to make due with good ol’ Stamm and his ventures into the land of the blues.

Our featured image shows Mack in his fancy new car, which is one idea as to how he will travel through the game. Remember, Mississippi Blues is in a prototyping stage (as always, this might not be in the actual game in this way) right now, so this is a pretty clever move. Why, you ask? Easy peasy. If your character moves by driving a car, you can throw out all the walking animation kerfuffle and let Mack ride from stage to stage. That sounds logical, you say? Why, right you are! See:

They See Me Rollin

It is also a sight to behold, when Stamm “animates” how he wants it to look in the game in a video call. When we first talked about the driving, he had no gif yet, so he manually moved the car over his screen, and made car sounds, because I have no idea how a car works, obviously.

Another nice way to simplify things, is to have your stages build up, like in this gif. Remember, in this prototype, Mack has to duel enemies, playing music, before moving on to the next stage. Every new stage, will pop up, as well as the counter-part and the duel can begin. Again, this gets rid of many animations and lets us move very quickly from stage to stage to play with the duel mechanic. The Woman Without A Name

Oh, hello there! Who might this be? She’s one of the characters in the game and a possible love interest for Mack. Her role, how they meet and what she does is not fully flushed out yet. She will probably play an instrument, or sing, so she can duel/duet with Mack, but more than that is not clear at this point. In any case, she looks like one hell of a lady! We have more! This is a possible story board  for the game. Everything is simplified to move through the main points of the story in a quick fashion. Mack receives his car, drives, by pressing button combinations, duels an adversary, also with button combinations, and moves to the next stage, while having an eye on the lady. Our current idea for the button combinations is that you have to rhythmically press them to keep the car moving, kind of like a mini game during the travel scenes, then during the duel/duet, you will have to use the combination to play music patterns at your opponent/partner. The loser gets removed by the almighty hand. Stamm is weird… 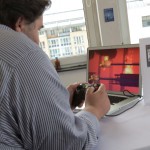 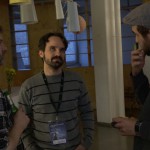 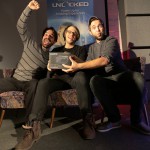 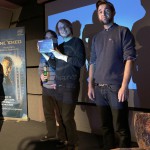 We still have more! These are official photos from the Intel Buzz Workshop, a few weeks back, where the boys showed On Rusty Trails and won a little Steam Machine at the showcase. Photo 4 is a typical “Jones wins stuff and can’t be seen in the picture” photo, which is an inside joke at this point. If we (hopefully) win more prizes, the collection of these photos will grow naturally and in a few years we will sell a photo book to commemorate Jones’ mysterious stage appearances.

OK, this wouldn’t be your favorite blog, without a bonus picture at the end: Christian sent over a shot from a serious playtesting session this week. Blown Away beta hype!