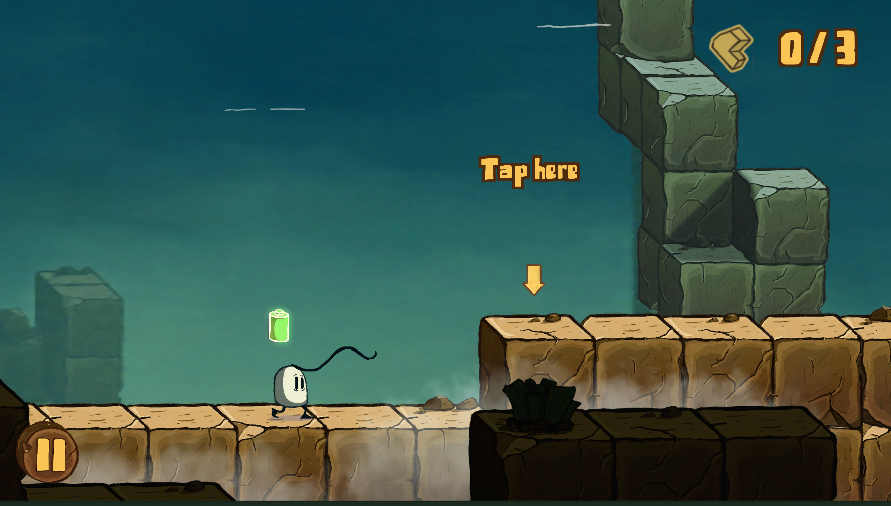 Hello everyone! It’s time for the weekly development update! And we are starting with Tobi, who is in the final weeks of the Blown Away production. Our featured image shows one of a series of screenshots he send me, from the new tutorial. He felt that just dropping the player into the game without some kind of explanation could become too confusing, so he added a little tutorial. The player will learn to use the teleport mechanic by tapping on the screen. Simple mechanic – simple tutorial. In the second instance, we can see a piece of the lost house and the player will learn to collect the missing pieces to achieve the best score in the level. Again, pretty straight forward. We also noticed during testing that some people would get distracted by the score counter in the top right corner, which was the same color as the pieces themselves. Some players kept tapping on the counter. To fix that, we changed the color of the counter and its size. Lastly, we have a shot of the end of a level. At first, the concept of the cloud seemed very obvious to us. Starting a level, the cloud will drop off Hendrik and he starts walking. So the logical conclusion to a level is, hopping back onto a cloud to move on. It still is, but in reality, the game starts too quickly for some players to pay attention to the cloud, when it drops them off. Or they see it and just think it’s the intro to the level. So, Tobi added a little checkered flag to the cloud at the end of the level and some text to explain what to do.

In the land of the blues, Christian and Stamm (now with humble programming skills from the sloth) have started to tinker around with some prototypes. Both of them did not specifically talk to each other about how they were approaching the matter, and so it is interesting to see the different strategies they used.

Stamm wanted to create a mechanic, where the player could send sound bits and patterns. The idea actually came from Tobi, when they spoke on the roof deck of the office. Side note: the roof of the building where or office is in, is a great place to walk around and think about your ideas.  The player (represented by a placeholder image of a trash can)  is sending out patterns of sound.

And in the second step Stamm looked at his creation and said, “It is not good for the trash can to be lonely. I will make a helper suitable for it. So he carved out a piece of the can and created a fridge (or however that stuff works) and the fridge could return the pattern. Stamm  had created multiplayer, and he saw it was good.  By the way, did you know that different scientists come to different conclusions on the age of trash cans and fridges? Some say, they have been here ages before humans, but they don’t come with tags, so your guess is as good as mine…

Okay, okay, I’m not gonna go overboard with this nonsense, don’t worry. The final stage of the prototype already uses assets from Stamm’s first artwork and player 2 now has to add something to the pattern to return it to player 1.  And so, the musical concept of call and response has been turned into a game mechanic.

And now for something completely different, Christian wanted to work with color patterns and button combinations. He even made short introductory videos with music for us!

I don’t want to talk too much about these videos, because Christian added captions, so telling you what you are going to see is rather pointless. Also, the blog is getting pretty long anyway, and I don’t want to bore you and drag it out.

That’s it for this week. Make sure to check back on the blog next Sunday and, as always, maybe mention it in your next conversation with your famous game journalist friends… or PewDiePie… or your grandma. We don’t discriminate when it comes to new fans. Tobi, drinking a cool Kellerbier, going over his to-do list for Blown Away.