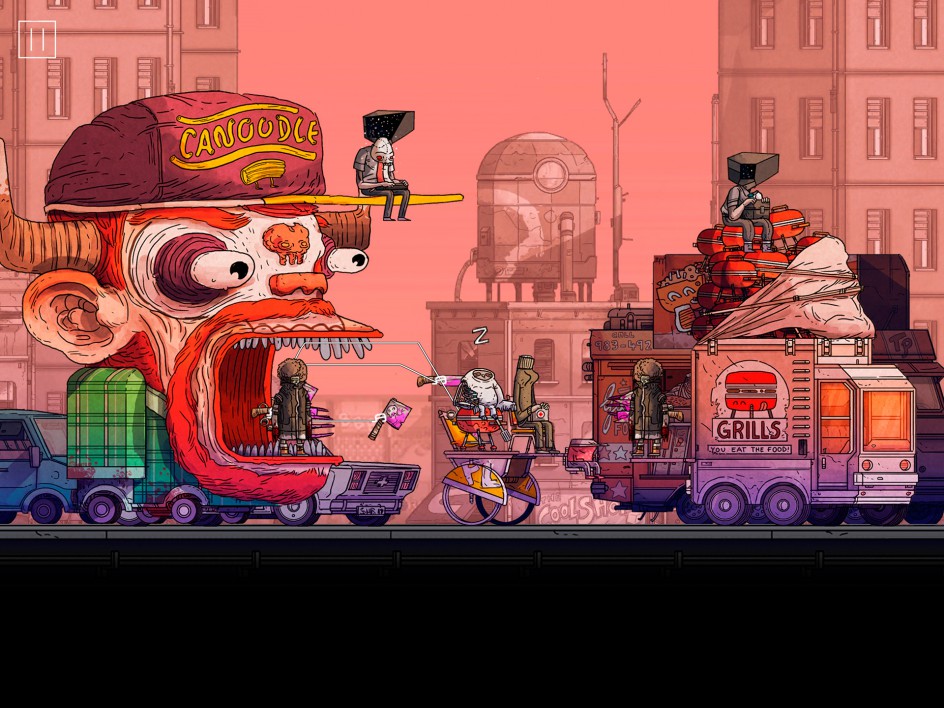 Hi everyone! It’s time for the weekly development update. This week is a little scarce with new artwork, I’m afraid. The featured image is one of the stages from Forkride Grilltime Sloth, which you may have seen a few weeks back on the blog, but I can’t be asked to destroy all my printers just so you get a new picture every week, sorry. The reason for the bottleneck with new art is that everyone has been busy with non art related things. In exchange, some weird stuff happened, which I will tell you about.

Let’s start with Mr. Jones, who normally doesn’t take part in the meetings for this blog, because he does engine programming and that must be the MOST interesting thing to write about in a lighthearted, silly way. In other words: when he starts explaining that stuff to me, I leave the conversation – mentally – after five minute or so. But he was here for this one and gave an account of what he was up to:
– made coffee
– bought a yoga mat
– Post effect stuff
– Transferred color values into the engine (purposely incorrect, “because we are punk”)
– Added “soft-porn vaseline filter” for the camera – I actually thought he was joking, but I learned a new thing! This technique actually exists. (People just don’t call it soft-porn, but apparently many vintage porn flicks used the technique as well.

Jones’ success story of the week: On Rusty Trails has entered Alpha 1 stage and we are internally playtesting. Yay! Alpha 2 to follow some time in the next weeks. If this goes well, we might see beta around the start of the new year.

Tobi wasn’t able to show art, because he was in bug-fix-country for Blown Away, and together with Christian, he worked on the Android integration for the game. He is also prototyping a tutorial stage, which might or might not make it into the final game. These things don’t really produce cool art, though. This is a screenshot from Stamm, doing a Gamma and RGB color test for On Rusty Trails, to see if the colors are displayed correctly and if Jones did good work.

Talking about Stamm. He was doing more homepage stuff, and Google Analytics integration for that. Plus drawing motifs for the new merchandise shop. He didn’t want to reveal them this week, so we’ll have to wait a little longer, but the shop should be going online soonish, so they will be available then. Stamm managed to break the game, and this is what was left on the screen. But Stamm did not only break the game. He also broke his Mac. Apparently he wanted to tidy his hard drive with some clean up utility software and stumbled across a mysterious file called something with Unity (which we use as an editor). He didn’t recognize the file, so he clicked ‘OK’… never press ‘OK’, if you don’t know the file! In the end, he had deleted Unity completely, and had to reinstall. I don’t know, if Jones cried tears of laughter or sorrow at that point.

The IGF entries are online and available to the public. 775 submissions have reached the festival, and we are responsible for two of those. We wish goo luck to all the entrants and are crossing our fingers for a Black Pants nomination.

OK, that’s it for this week. Make sure to check back next Sunday and have a great week. We’re getting closer and closer to the Blown Away release in December! The hype is real!