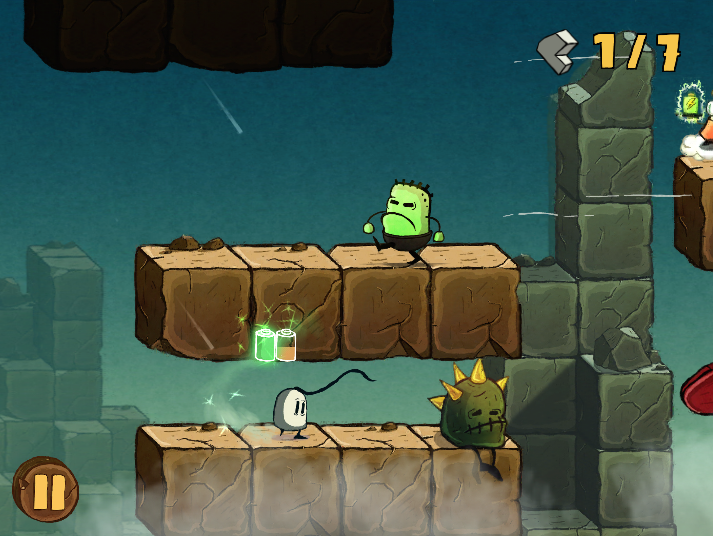 It is time for the weekly development update. It has been a turbulent 24 hours here at Black Pants. Like I told you last week, Stamm and I will be flying out to Milan next week to show our games at the Expo and let the visitors play them.

Now, to our surprise, we have received a last minute invitation to the Pocket Gamer Connects: Helsinki, which is also next week. We had submitted Blown Away to the “Very Big Indie Pitch” and were chosen to present there! Free ticket and awesome press contacts, yay! And guess, who has the honor to go? You are correct: me. I honestly don’t force the guys to let me go to these, they just send me willingly. I won’t say no to that! Berlin, Helsinki, Milan in one week sounds like my kind of gig 😉

If any of you are at these events, make sure to meet up with us/me. Just shoot me a quick comment/tweet/mail, and we can do this!

Now to the nice images. Our featured image is a new enemy in Blown Away. He’s called the Aggressive Looter. You can see him striding through the level, looking for precious treasures. Why is he aggressive, is what you’re asking. Same thing for me. Pray tell, Mr. Tobi, why is a looter angry, when he has all that awesome stuff? “Because he doesn’t find anything!” Poor dude. But as long as he leaves Hendrik’s house pieces alone, he is fine in my book.

Animated pictures are always a plus, so here is the aggressive guy in action. Looks like me, when Stamm doesn’t submit stuff to the content blog, hint hint. He is excused, though, because Milan preparations and his secret project are taking up all of his time. Because Tobi helped out Bao with her animated film last month and also because Bao is super cool, she has been helping him with animating the grumpy dude. Tobi says, that’s because he needs time to drink coffee, but I suspect, Bao just kicks his ass at animating. Shots fired!

This is George Clooney’s tattoo from From Dusk Till Dawn. Actually, it’s Hendrik’s flowing hair, which also had to be animated. It’s really sad, that the wind not only took his home, but also his hair! Hits me right in the feels, although I have my gene pool to thank for it. At least, I still have a roof over my head.

You can see, how the animated hair cycles through all the states from the still picture above.

By the way, have you noticed, how we still have not once talked about how the game works in all these blogs? Then you are an attentive reader! We know many things about characters and story and that Tobi hates doing his taxes, but nothing about how the mechanics work. Tobi wants to build up some more suspense, but soon it will all be revealed.

The answer, my friends, is blowing in the wind. (Not really, though, I just needed to get this pun off my chest).

That’s it for this week! I am not 100% sure on next week’s blog schedule and content, because I’ll be away, but I guess, we’ll have a special Tour de Murmel thingy on the weekend, if my brain still works.

Cheerio and see you next week!