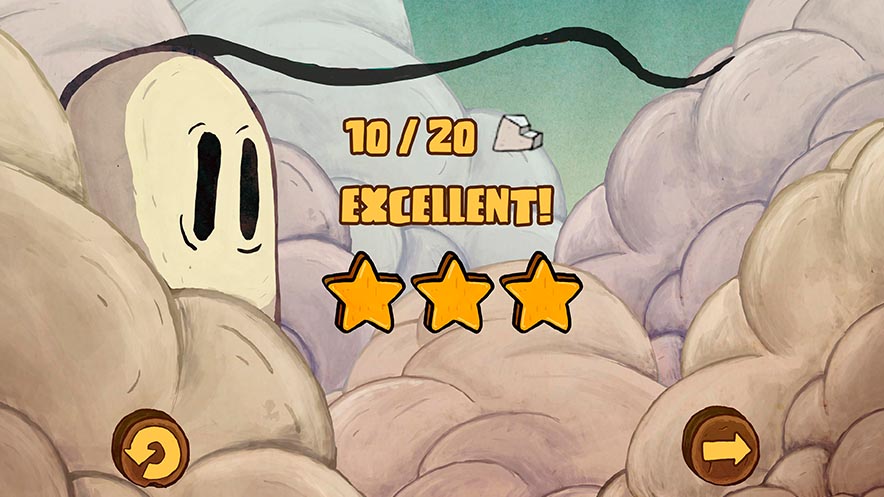 It’s time for the weekly development update. Our featured image shows the screen that will pop up after finishing a level in Blown Away. The concept is pretty simple and what you have come to expect from a mobile game with collectibles and level goals. You can pick up parts of Hendrik’s house in the levels. The stars will rate your success, depending on how many stones you were able to collect. So if you want that perfect score, you better not miss any stones! Tobi spent so time on menus. This is the stage select menu for The Broken Fields. The current build of the game has 75  levels over 4 worlds. This number is not final, but it will end up in that ballpark. my last information was that we will have an internal beta test session some time next week, which means, we are getting closer and closer to the release date! Hype! For me, that means I have to update our press mailing list and coordinate things between content and marketing. This menu screen is one layer above the stage select and shows how many parts of Hendrik’s house have been collected in every world. I really hope, our little friend will be able to piece his house back together at the end of it all. Not to mention that beautiful hair. Would be a shame, if he had to go full Trump. In the Lost Documents picture, Hendrik is wondering what exactly is going on around him. This can be traced back to Tobi’s aversion towards tax documents and the financial authorities, I presume. Or he could be wondering, what Stamm is up to this week.

What can I tell you. Stamm is still holding out on us. He is actually doing super boring arrangement stuff for On Rusty Trails, which doesn’t really produce beautiful artwork. He also had to do some preparation for a fun trip we are going to take. Stamm and I are flying out to the Expo Milan in early September, because we scored a sweet gig at the German pavilion. We’ll be talking about the studio and our games and the audience will have the opportunity to play them with us. The date is September the 10th, so if you are anywhere near Milan, come visit us! More info on that on next week’s blog.

To top things off, Stamm is on a secret mission again (we do love dropping surprises here, I have to admit) and will have a reveal later this fall. I just told him, people wanted to see something in advance and he can’t always hold out on the blog, so he graced me with what he has for us. Behold!

That’s it for this week. One more work day until the weekend, so have a great one, and see you next week!