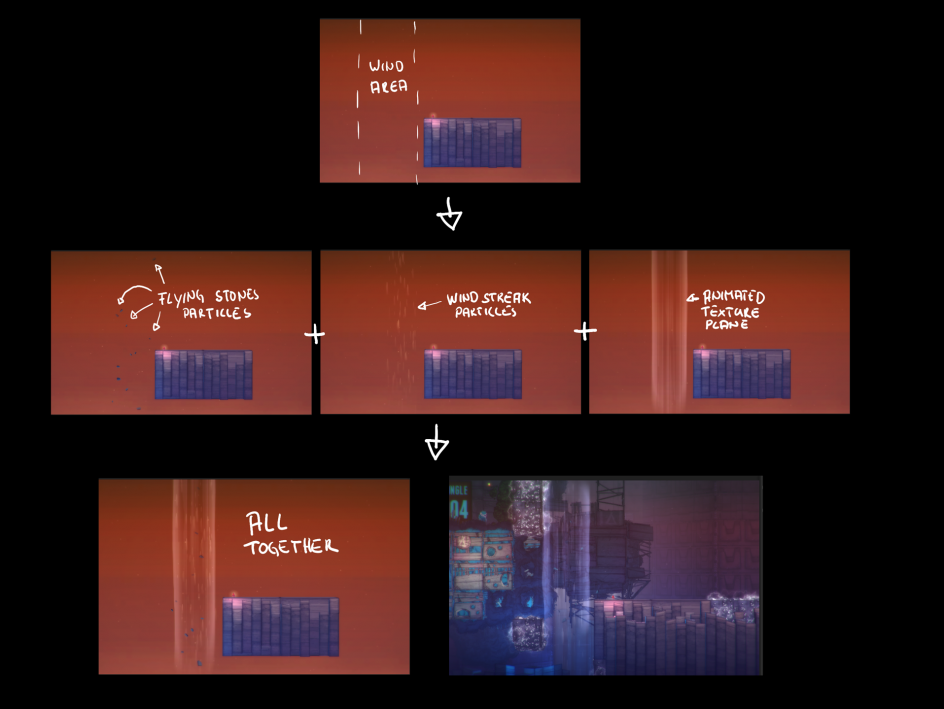 This week’s development update comes to you, straight from the Black Pants HQ in Berlin. We’re meeting here, this weekend, to talk about our projects and how everything is going. While the partners (Christian, Stamm, Tobi, Jones) are having their meeting, I am typing up the blog.

And we are winding things up (I can feel the puns coming back to the blog!) with a sketch from Tobi. He jumped back onto ORT and started by rearranging the 115 levels (You heard me, one-hundred and fifteen – at this point) for a better gameplay feeling and coherent difficulty changes.

The featured image shows his process of making the wind fountains look nicer. He chooses an area for the stream, then starts with small particles like stones and rocks. He then adds particles to symbolize the flow of the wind and lays an animated texture on top of everything. Done with the wind.

Of course, everything is nicer when you can see it move, so here is a gif of the finished air stream in the game.

And here, our little friend Elvis, jumps into the stream to reach higher platforms. The best thing about the animation in this is that as he enters the air stream, Elvis gets turned on his head. Reminds me of a tiny bug that gets dragged around by the wind.

It is time to file a formal complaint. As we meet every week to talk about the content for the blog, Stamm has been using these meetings to pitch me his, frankly, crazy comic ideas. Ass soon as a sentence starts with “And this is the sketch of the day…” you know you’re in for a ride. I think it is fair to say that he really produces (f)art. I fear the day, these tings will see a public release!

For ORT he has been doing signs again, and here is what he has to show for it.

A core theme of the game is the animosity between Spikes and Hairies. The main mechanic of switching between the two races to have access to certain platform is the most subtle way of introducing that to the game and the player. To add to that experience, the story needs to feature scenes to intensify the motif. This gif is from a party in Spike city, where the red guys are having a blast.

Since, on their own, the Spikes are quite lovely people, they are having a great time, enjoying some drinks, toasting each other. Notice the little triangle, when they put their glasses together? Took me three looks to realize that. Design deluxe! How the whole animosity theme gets handled over the course of the story is a secret at this point, and so you will have to play the game to find out. Hook, line and sinker.

As the color in this area suggests, this area is off limits for everyone. Beyond this point, there lies a horrible secret which is not to be spoiled during this blog. Thank Olaf, there is a savepoint right before the area, so you won’t have to walk too far after dying…and die you will! MWAHAHAHAH!

Sad note of the blog: I took some photos at a Korean barbecue place we went to, to use for the blog, but my phone’s camera decided to crap out and leave a blurry mess. 🙁 I hope, I will get a chance to take a team pic very soon, to put up here.

That’s it for this week. See you next week!