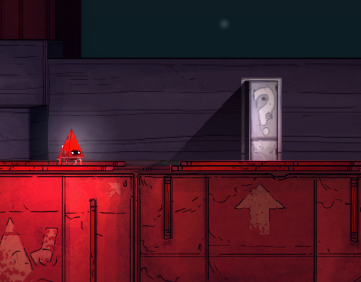 As announced last week, we had to shoot Tobi and get rid of him, so there are no news from him this week. (He is actually visiting his family back home, no worries).

Our featured image is a mystery. Someone has planted several of these question marks all over the world of On Rusty Trails. Maybe the Riddler had some time off, because Arkham Knight had to be taken offline? One can only guess at this point. Since it is 4th of July weekend, Stamm is chiming in on the celebrations, presenting us with the Statue of Liberty… um… Olaf. As I had mentioned before, Olaf is the Spike People’s master builder and has helped thousands and thousands of Spikes to move into their own homes, so they built him this statue.

Between us: On Rusty Trails was first pitched as an economy simulation about bad mortgages and Elvis was previously named Freddie Mac. You heard it here first!

If you start with a statue, why not stick with it? Is what Stamm was probably thinking. He also sent over this 3D model of a Hairy statue. On a second look, this seems to be a tomb stone of some sort. Mystery Pants is what we should be called! CATASTROPHE! Since the game has received some nice upgrades and updates of the textures, it has become time to revamp our first scene accordingly. Elvis’ house has undergone some construction and is looking super fancy now!

Unfortunately, no visual upgrade can save the house from its fate. Storms and rain will tear it down eventually. Poor Elvis.

This is it for this week. I feel like this one was not too far on the silly side, which is a little sad, since I like the blog silly. To my defense, I am writing this in the biggest German summer heat of the year and my brain is melting as I am typing this, so it took me ages to formulate sentences. I am basically a real life representation of the Hairies and I need a thunderstorm right now!

See you next week, with Tobi. Promise!