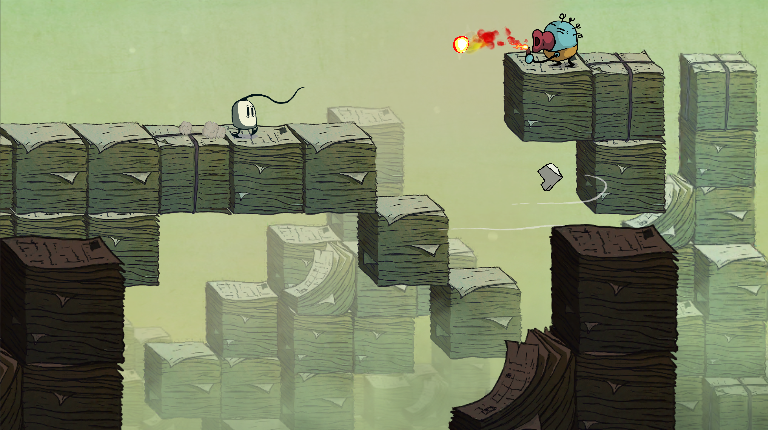 Hello everyone,
The weekly update is here, to sweeten your weekend and Blown Away starts us off.

The first image shows the “Flame Thrower”, which is one of Hendrik’s enemies. Tobi sends us on a trip from the conception of the character to its finished form. In the image you can see him, spitting a fireball at Hendrik in one of the lost documents levels. This is the first step, a simple sketch with all the parts attached. Look at those eyes! Pure evil. This dude creeps me the hell out! After the early sketch comes a colored version, divided into single parts, the eyes, the body, feet, hand, candle and flame. This is done in preparation to animate the character. The next step is a rigged version. This means, Tobi adds “bones” to the character, which he can move around for animation. As you may know, Tobi comes from animation films and has spent quite some time on animating things. He told me, he found the best way to animate characters for him turns out to be a mixture of classic 2D animation and the rigging. To elaborate: Classic animation is done frame by frame, which you all know from flip books. This process has the big flaw that if the finished animation turns out to be too fast or too slow, for example, you have to start all over again. The combination with the rigged character lets you tweak details of the cycle and is therefore more forgiving. This one is the complete animation cycle in all 20 phases. There is not really much to describe about it, except that the animation runs through all states from 1 to 20 and then starts from the beginning.

And this is what the finished animation looks like. I can already see him wreaking havoc, especially in that paper level. Get out of here, you little creep!

“Mr. Real Life” Tobi, sends us off with a shot from the working cave. Him and Thomas are testing Blown Away with a cup(!) of beer.  He also told me to point out Bao’s tiny beer mug, right above the iPad. Cute 🙂 Short interlude at this point: The Berlin office recently had visitors. A group of students, whom I had met at Berlin Games Week, wanted to drop by and check out the office and also talk to Stamm. Apparently he is this cool guy who draws nice pictures. Totally overrated, if you ask me. Well, Stamm tells me he really had fun with them and thought it would be nice to have a picture on the blog, so here we go: We’re always a little sad that we don’t have the time and resources to take on interns, so if interested students want to have a glimpse at the studio, we try to arrange a visit, when time allows it.

Speaking of Stamm, we also have some On Rust Trails things to look at. The following gifs show masterful crafted animation art and this sentence is placed here of my own volition and I was in no way coerced to present his Majes… errrr Stamm’s work in this way.

We begin with a teaser gif that may or may not show part of a boss somewhere in the game. Could also be some kind of Pong mod for on Rusty Trails. No one tells me anything around here.

This awesome little gif shows off a freshly added feature – platforms with feedback. The gameplay of On Rusty Trails is pretty speedy and we found that bolting through these levels sometimes gets pretty hectic. So we decided to add a feedback to the platforms Elvis lands on to give a visual cue to players. This helps with game overview and gives a more rewarding feeling for landing on platforms.

This and the next gif are savepoint shots. Elvis can access savepoints after harder passages to save progress. This will only be possible though, if the player has collected some kind of currency (this is a placeholder, the name has not been decided on) that is scattered throughout the levels. This is a Spike savepoint and can only be accessed in your Spike form, and only with currency, of which Elvis has none at this point, so he cannot save his progress.

The same goes for this savepoint, except it is a Hairy savepoint, but no currency, no saving.

A news courier from the programmer front has told me that the guys are working hard on reaching Milestone 2. This information means nothing to you, but his Majesty felt bad for the programmers, since they never get to show off in this blog, so he graced us with this announcement to make them feel better. Now dance and make us laugh, coding jesters!

Signing off for this week. Have a great Sunday and see you next week!