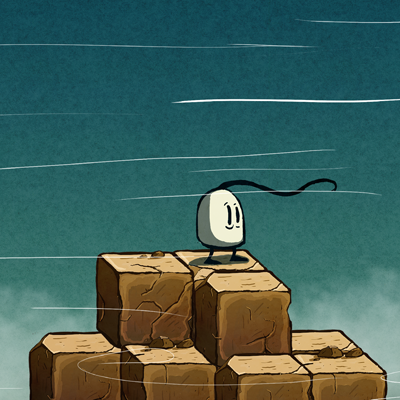 Yello everyone, the Black Pants are here, to move into your wardrobe!

We jump right into the weekly update with the reveal of Blown Away’s main character Hendrik. Tobi has finished modelling the little friend, decided on the name and sent over this image of him standing in a level, the wind blowing around him. Cute little fellow, indeed!

And since we are never content with still life, he also included the walking animation. First, you can see the 12 single steps, which the walking cycle is comprised of. This is basic animation work, as you would see it in animated films, and games. The feet/legs and hair are in different positions for every step.

And here we have the animated Hendrik, as he strides through the wind, proudly sporting the only hair he has left on his sweet, little head. Damn you, wind!

More info on the gameplay, mechanics and background story will follow over the next week, but this week we have some more assets from the third known world of the game. The world is called the Burning Playground and the name is pretty telling. As in the other levels, we have block elements that lay the foundation of the environment.

This is a shot of the cubes in a level setting. Tobi’s comment on the Playground world was as follows: “The Burning Playground was inspired by Terminator 2, playgrounds must burn!” This is not at all creepy. Way to get that ESRB rating, Tobi! I can see us winning more “best youth game” awards in the future.

On the sane side of things, we have Stamm, who has been working on boss fights in On Rusty Trails and handed in a plethora of gifs. First up, a series of Blocks from the Machine levels.

This is the purple heart of On Rusty Trails. It is a military decoration from people that own guns that Elvis is awarded after completing the game. Or not. Maybe it is something that can’t be revealed yet, for suspense and sweaty palms reasons. You decide.

The next block shows a Spike with blinking eyes. This is also completely random and has nothing to do with the story at all.™

I love, how we have elements in the game that make me say things like: “This is a Hairy woman”. Thanks for that. Also, Shakespeare called, he wants his script back. What? I didn’t say anything.

Enough of this! We were promised bosses and bosses we shall receive!

This very scary machine is the central part of one boss fight, with its sharp fangs and elemental beams of doom. Disclaimer: The boss is work in progress and might look different in its finished form. It would also be pretty lame to tell you more than the obvious on this, since figuring out what is going on is part of the game.

And a closer look at the center of the death machine. OK, I will let you in on the secret. The fight goes like this:

Grandmother’s House
Enter Little Red Elvis, carrying a basket with bolts and tools to repair his old, rusty grandmother. Upon entering the room he sees the machine

Have a great weekend!