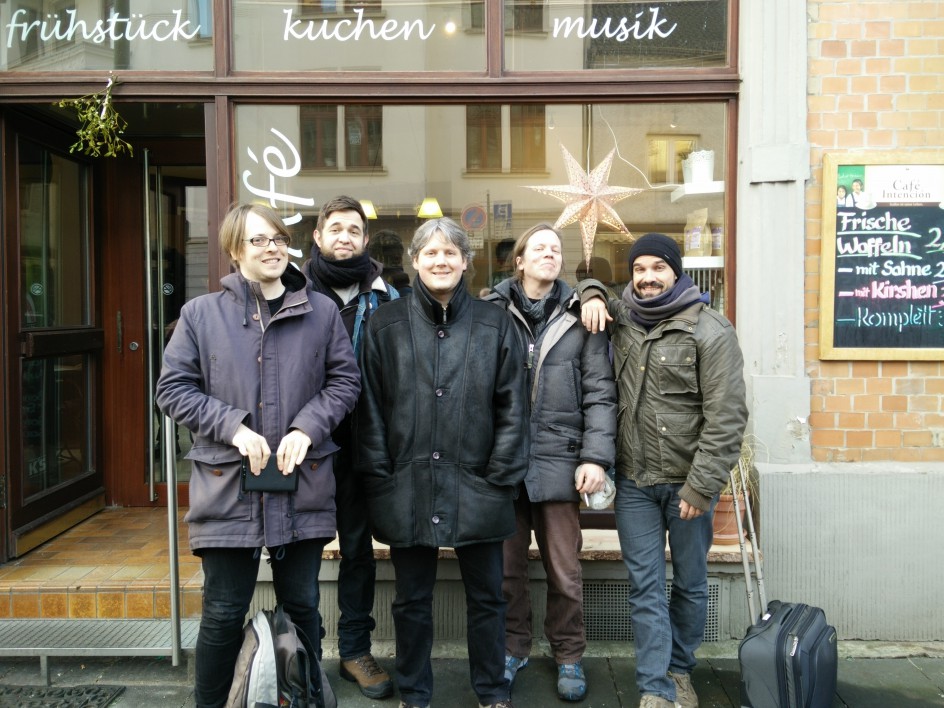 Hi everyone! It’s once again time for the development update – the first of 2016. Just a quick one, to get things rolling again, since we haven’t had a content meeting so far.

We started the year off with a two day meeting in Kassel, to talk about how the last year of projects went, to set milestones for current projects and so that everyone could hang out in a relaxed atmosphere. I didn’t take too many photos, but on top we have the whole team together – except the photographer: Rico, Stamm, Christian, Tobi, Jones.

We also packed up the rest of our stuff at the old university office, where roots of the studio lie, a few years ago. For me it was never really “home”, because most of the guys had moved to Berlin when I came, and I only went there twice a week and later only once a month to check in, but I think, some of the guys were packing the boxes with one smiling and one crying eye. The Old Meeting Place In Front Of The University

A cause for celebration was the honorable mention for Forkride Grilltime Sloth in this year’s IGF nomination. No nomination sadly means no visit to the USA, but we’re proud of the accomplishment nonetheless. It also was Stamm’s first solo project, where he did all the programming himself, so that is even cooler. As for a release of the game, we are not quite sure at the moment. Stamm would have to put in a few more weeks, to fix some bugs and he is jammed with work for our main projects. So it might take some time for the sloth to see the light of day as a polished release.

Last but not least, we did a recap of the Blown Away release from before Christmas and talked about sales and feedback from press and fans. We can, very confidently, say that we have released a good game and user reviews are showing exactly that.

When We Hit 500 User Ratings On Google Play

On the iTunes App Store, Blown Away was featured after Christmas and we saw some purchases. The Google Play Store is on a different business model. iOS players have to buy the game upfront for the full amount of $/€ 2.99, while Android players get a free download with the first world as demo levels and the option to buy the rest of the game for the same price as on iOS. I don’t want to take too much away from an extended post mortem at this point, so I won’t go into detail. We sadly had no feature on Google Play, but we hope with an update and more downloads and reviews, we can get one in the future.

Press reactions were also very positive like on Pocket Gamer, iPlay Apps (German) or Stuff but some more reviews on big sites would have been nice. I am still working on contacting as many blogs as possible for reviews.

More on this topic in a dedicated post mortem, to be published soon™.