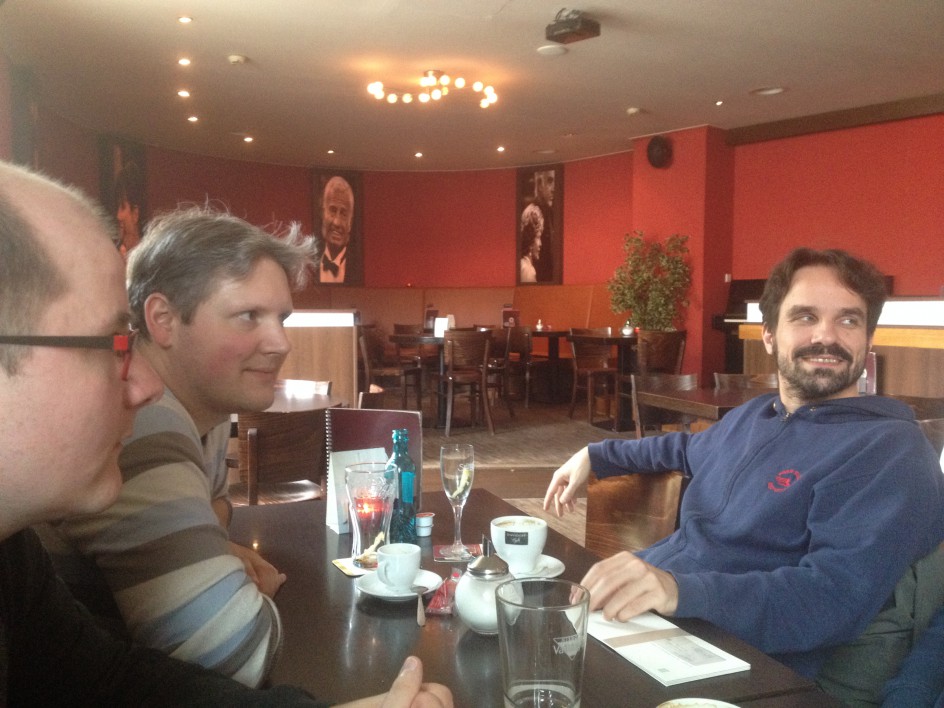 It’s time for the weekly development update. Although, to be fair, there is not much development in this update, but the blog must go on! So we’ll make it quick.

The week started off with the Berlin boys coming to Kassel for a notary appointment. It was just a short stay for half the day and I forgot to take pictures, but Stamm provided me with a shot from our lunch. Me, Christian and Jones. Not in the picture: Lennert, Tobi, Stamm. Rico had stayed in Berlin, since he didn’t have to attend the appointment.

Instead, he had his big day one day later at the Intel Buzz Workshop in Berlin. Rico had decided, he wanted to show On Rusty Trails to the audience there, so he contacted the organizers and secured a spot in the showcase. I didn’t attend the event, so I have to rely on Stamm’s account of the goings one there. Stamm: “You have to check out betahaus, next time you’re in Berlin. It has a café and it’s the biggest co-working space I know – and I know two!” That’s how Stamm pitched the venue to me. Guess I’ll have to check it out next time. Stamm, Jones and Rico attended the event, while Rico was the one pitching the game to the visitors of the showcase, Jones and Stamm were lazy and entertained the audience with fart jokes and other nonsense. The above picture must be the single moment, when Jones did something productive (hearsay). The picture is a little unfair, because Stamm took all of them, so there is, of course, none in which he is laying in a beanbag. But believe me, he was lazy. The event featured many of our indie friends, like Maschinen-Mensch, and talks from Wolf of the Threaks, Jana from Ratking and Alex from Studio Fizbin.

To our surprise and joy, ORT was chosen as the winner of the showcase and Rico was very content with his presentation skills, which is the perfect description of the following picture. The overall feedback was great, for ORT as well as Blown Away and Stamm’s secret project. The guys had used the event as a little play testing session with a focus group of game devs, and they were happy with the results.

We want to thank Bemyapp and Intel (do I need to link Intel? You know who they are) for hosting the event, all the audience, for playing the games and giving feedback and give a shout-out to all the other games in the competition.

We’ll be back next week, with more in-game content. I will use force to get the guys to give up some screenshots, if I have to. As a reward for sticking around until the end, here is the consolation prize. Guess I’ll have to take one for the team. Have a picture of me as an old cat lady from last year’s Halloween. Enjoy! (For all our sake, I hope the guys will have content next week, or I’ll have to resort to more drastic measures) See you next week!