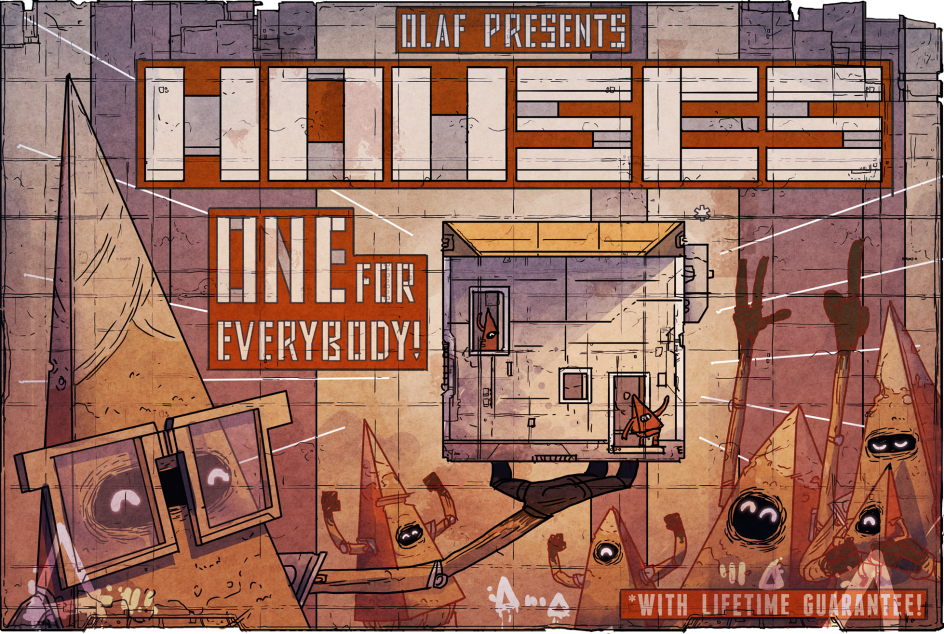 Comrades, the weekly update has arrived!

And we start the propaganda machine with our featured picture this week. Stamm has outdone himself with the Spike billboards. The first one shows Olaf, Chief Housing Manufacturer of the Spike People. In his factory homes for all the Spikes are built – including a lifetime guarantee. They were obviously not expecting the storms and rain… This is the billboard again, standing in the game, all done with lighting and stuff. Olaf is my favorite character, so far. Look at these glasses! He looks like the freaking supreme leader of you know what country. Naturally, all these houses aren’t building themselves, so the factory is always looking for new workers to help out. These billboards replicate the propaganda style of the 20th century so well, I can’t help but love them. Such great work. I am really proud of Stamm for these. And the billboard in an ingame setting again. Band together, working class, to build our homes and help your people!

For the sad part of this blog entry I have to report that Komsomol member Tobi did not attend the content meeting at the designated time. We believe, he was conspiring with the class enemy. He turned up later with an apology and an “offer of restitution”, but please bear in mind that you have to assume these materials to be tainted with enemy rhetoric, when you look at them. Comrade Tobi has been declared enemy of the People’s Republic Of Pants and will be swiftly punished by the firing squad. From Cactus To Guy

One of Hendrik’s obstacles in Blown Away was a cactus.  The interaction is pretty self-explanatory. Touch the cactus, lose your life. Through the iteration process, Tobi came to the decision he wanted all obstacles to be creatures/people instead of objects, since this breathes more life into the levels. So the boring cactus made a transition to the Cactus Guy. Here you can see the sad Cactus Guy in one of the stone levels. At this point his character trait is being a depressed dude, because he is spiky and that fact makes human interaction very hard. This is not final yet, but how he is right now. If Hendrik touches him, it’s game over.

The next character to be found in the game is this lovely (and still somehow creepy) granny. Hendrik sometimes needs a power-up and granny is here to deliver. Tobi told me, she was first holding German dumplings on her tray, but it was hard to transport this knowledge from the picture to the player, so in her current iteration she is holding a battery. Maybe this will change again, we will see. Granny On The Playground

And here we have our granny in one of the burning playground levels, holding that sweet, juicy battery out for Hendrik to grab.

Comrades, this is it for the week. Remember to stay vigilant and report suspicious activity to your local authorities. The revolution never sleeps!